Worst Airports to Sleep At

Nothing is worse than missing a flight...unless it's having a flight delayed, or worse yet, canceled. When that happens, most people find themselves scrounging around for a last-minute hotel reservation in hopes they can salvage their sanity. Nothing like a comfy hotel bed and a nice hot shower to make up for a stressful travel hiccup, right?

By now you should know if it involves an added expense, count me out.

I'm not sure how many airports I've slept in, but I can tell you:

The Worst Airports to Sleep At

Disclaimer: Each of these experiences was unique to my particular situation, and I understand others have fared much better.

Years ago, I took my first trip to Europe. Growing up in North Dakota and having traveled only to the exotic country of Canada prior, I was 100% out of my element. I didn't know public transportation, I was unfamiliar with airports in general, and don't get me started on English not being the first language. I had ~12 hours in Stockholm and no clue what to do. Arlanda is 25 miles from the city of Stockholm, so I knew the first thing I had to do was just get there. After learning about the Midnight Sun, I was eager to experience daylight at night, so I thought I would walk all around the city and take it in. Remember how I said I wasn't experienced with public transportation? As it turned out, once I arrived in Stockholm City, the train operator informed me I would only have X minutes before the final train departed back to the airport. Having no working knowledge of transportation options in an urban environment, I took the only choice I thought I had to return to the airport to make my next flight. This put me back at the airport around midnight. I attempted to pass through security, but because my flight didn't leave until later in the morning, my ticket and I were not permitted to pass to the gates. This is why Stockholm Arlanda earned the #3 spot on this list. With just access to the entrance of the airport, it made for horrible sleep conditions: no areas of privacy to hide behind and sleep in peace, exposed to the front doors, and horrendous seating options (no cushioned anything). After hours of shifting back and forth on a metal bench, it was finally an acceptable time to enter the security checkpoint. A horrible night passed and I found myself in the terminal, where fellow travelers were drinking alcoholic beverages...with their breakfast. What an experience.

One of the most memorable trips I've ever taken was the adventure to Iceland. It was a whirlwind of experiences, both good and bad. The experience at Boston Airport was bad. My friends and I arrived shortly before midnight and our connecting flight to Iceland wouldn't leave until the next afternoon. Thankfully my travel companions had the same financial mindset as myself, so we bypassed a hotel & instead opted for "Hotel Logan Airport". The night was spent by the baggage carousels slumped over our suitcases and propped against one another. Was it the best sleep I've gotten at an airport? Not even close, but I was grateful to not be in it alone. 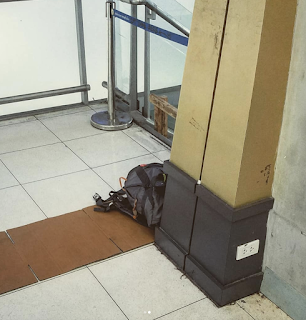 As a result of a missed flight and a complete redirect to Bangkok, I had no choice but to make it my home for one evening. I had two real complaints about my stay. Unfortunately, they are two of the biggest inconveniences when sleeping at an airport, so Bangkok Airport earned itself the #1 spot here. Reason #1 why this wasn't a pleasant night's sleep was due to how busy this airport was. There were people around constantly; there was no escaping them. The second reason was what made my overnight stay so horrible. The level of cleanliness or lack of was a bit overwhelming. It's one thing to sleep in a highly active area. You put on some noise-canceling headphones and pretend they're not there, but finding a place where you aren't sitting somewhere dirty was aggravating.


Do I regret any of these decisions made because of my frugal nature? Not one bit! They all gave me memories I look back on and let's be real: not every aspect of travel is as glamorous as Instagram might make it out to be.