What if the U.S. was Invaded?!

Over the past two years, I have found myself saying, "There's no way that would ever happen," more times than I can count. Much to my dismay, a majority of these instances have in fact become part of our world's reality.

Most of the inspiration for this "What If" post came from the movie Red Dawn. In the original Red Dawn from 1984, the United States is invaded by the Soviet Union, Nicaragua, and Cuba. In the 2012 remake, which is better than the original, the U.S. is invaded by North Korea (although it was supposed to be China). Watching this movie, my imagination was running on all cylinders, and with everything that has been going on in the world in recent memory, I thought this "What If" was well overdue.

*Reminder: This is a completely hypothetical what-if scenario that I've come up with solely for the purpose of entertainment.*

Who Would Invade the U.S.?
- China, Iran, North Korea, and/or Russia

What Would They Invade?
- Civilian areas to disrupt the flow of activities

When Would They Invade?
- Christmas holiday season

How Would They Invade?
- China: Pacific Islands (Guam, Northern Mariana, etc.)
- Iran: missiles to the East Coast
- North Korea: missiles to the West Coast
- Russia: Alaska
- Any combination of troops to the coasts, islands, and/or Alaska

Why Would They Invade?
- Religious ideology
- Halt capitalistic agenda
- International political turmoil
- Prevent democratic expansion
- Further the interests of another country
- Retaliation for any conflict the U.S. (direct/indirect) participated in over the last hundred years
- Fill-in-the-blank

Alright, now that we've got the details behind the hypothetical invasion covered, let's look at

Where You Do NOT Want to Be During the Invasion 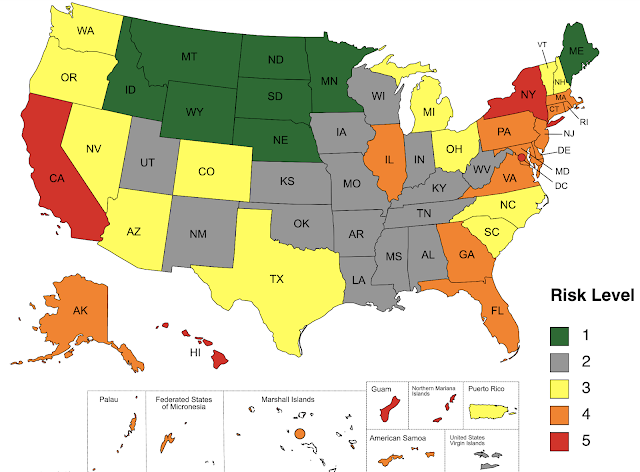 Where Would You Want to Be?

My advice would be to get somewhere "undesirable". Staying away from transportation hubs, populated areas, and strategic targets would be key. You'd want to keep your party's number low for added flexibility. Ideally, you'd have a means of transport, supplies, and a form of communication. The trick would be maintaining your food, fuel, etc. while also moving from place to place without disruption.

Like I said at the beginning, this was purely for entertainment purposes. I hope you found it amusing, and maybe even thought about what your plan would be for such a scenario. I'd love to hear what your plan would be in the comment section below! Would you try to escape to someplace isolated and do your own thing? Would you attempt to continue on with your normal life if the invaders allowed you?

Would you join the Wolverines?